Brian received his Ph.D. in Chemical & Biomolecular Engineering from the Johns Hopkins University, where his research was focused on cell-fate specification in developing embryos and in stem cell populations.  He went on to receive postdoctoral training in the Cell Biology and Metabolism branch of the National Institutes of Health (NIH), where he applied advanced imaging techniques to study intracellular trafficking in the secretory pathway.  While working in Washington, Brian became involved in public policy and was selected as an AAAS Science & Technology Policy Fellow in the area of global health security.  In this role, Brian managed interactions between several departments and agencies of the US Government, as well as Non-governmental Organizations and foreign governments with the goal of improving global disease detection, diagnosis, and reporting.  Brian went on to join Draper Laboratory, a non-profit R&D spinout from MIT, where he managed technology development partnerships aimed at improving the efficiency of drug discovery and development.  In his current role at the Broad Institute, Brian manages strategic alliances within the Cardiovascular Disease Initiative. 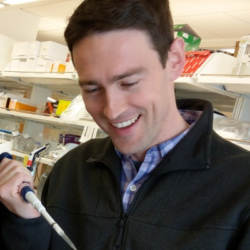